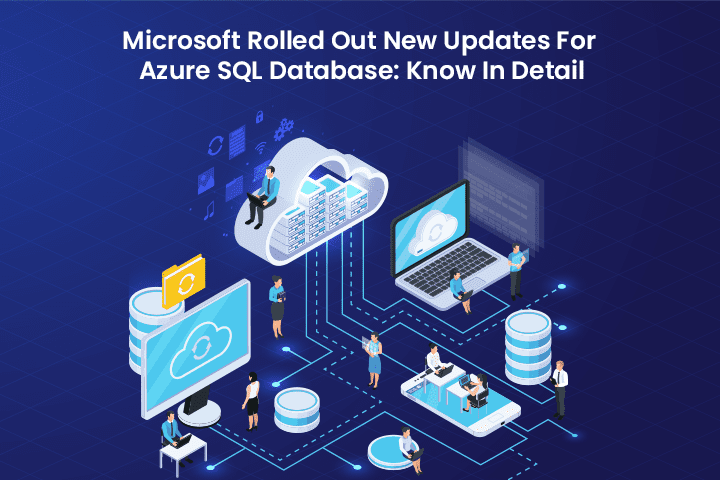 Businesses are also moving their traditional database to the cloud to enjoy the benefits of flexible, affordable, and scalable database management. Azure SQL Database stands out as the best PaaS database engine that handles most of the database management without any user interference. Let’s understand it in detail.

What is Azure SQL Database?

With changing market trends and customer demands evolution, the applications must step in with the changes. In the same vein, Microsoft continuously upgrades Azure SQL Database Service to meet the modern application development demands. Here, we have come up with Top Azure SQL Database Upgrade 2022 to know what’s added, modified, and removed in the latest version.

Which are the updates rolled out in the latest Azure SQL Database release?

It’s one of the Best Azure SQL Database feature updates that allow developers to create a continuously synchronized readable secondary database for the primary database. The readable secondary database that’s also referred to as geo-replicas help businesses perform disaster recovery of individual database quickly in the event of unexpected failure or large-scale outage. When geo-replication is set up, geo-failover is initiated anytime either manually or programmatically via the application. Following diagram showcase how geo-redundant cloud configuration leverages active geo-replication. Using the always-on availability group on technology, the active geo-replication asynchronously replicates the transactions log that’s created from the primary replica to all geo-replicas. The secondary databases though a little behind the primary database, but data is always transactionally consistent.

Auto-failover groups are designed to simplify the deployment and management of the geo-replicated databases on the top of the active geo-replication feature. It allows developers to best manage failover and replication of a few or all the databases on a logical server.

The geo-failover is initiated either manually or by the Azure SQL Database Service. the latter alternative is more preferred as they automatically recover multiple related databases after the unplanned event or catastrophic failure that results in the loss of databases. Update to ledger has also remained as the top Azure SQL Database Upgrade 2022 that improves data protection by preventing fraudsters or high-privilege users such as cloud administrators, system administrators, or database administrators to tamper with the data. With tamper-evidence and cryptographically attestation capabilities, the ledger helps in ensuring data has not tampered with.

Ledger preserves historical data by maintaining its previous value in the history table and provides a chronicle of all changes made to the database. Ledger functionality comes in two flavors- an updated ledger table or an append-only ledger table. This feature is a great help for digital forensics, streamlining audits, off-chain storage for blockchain, and other processes. Change data capture works like its name, that’s it keeps a record of all the changes made to the database. It records all the activities such as addition, updation, or deletion applied to the table using an SQL server agent. Consequently, the detail of changes gets available in relational format. In the latest update, it’s available for Azure SQL Database which helps a ton during migration. Saying the latest update to this feature is a boon for Azure Database Migration Services as it’s easy to access the changes made to data or any errors if it occurs.

Azure availability zone in Azure SQL Database ensures that the database remains up and running 99.99% of the time irrespective of outages effects, unexpected failures, and maintenance operations glitches. The high availability solutions are engineered to guarantee that no planned downtimes or maintenance windows are required when the database is upgraded.

The introduction of an availability solution to Azure SQL Database enables SQL database to place business-critical database replicas to different availability zones and eliminates a single point of failure with control ring duplication.

The planned maintenance of Azure SQL Database even after availing of Azure Database Migration Services is important, wherein they are subjected to short reconfigurations within respective SLAs. That’s where the maintenance window helps in configuring maintenance schedules and diminishes the impact of maintenance.

The maintenance window helps in gaining more predictability as it’s adjusted according to the Azure region to save time during working hours. The developers are also allowed to configure maintenance notifications for the planned maintenance event.

Get the detailed information about Azure SQL database

Microsoft products allow businesses to stay ahead of the game with continuous enhancements. The latest release includes top Azure SQL Database Upgrade 2022 which has brought mesmerizing additions and modifications to the database that improved Azure Database Migration Services at scale. Many features are added by the Microsoft team to Azure SQL Database to preview release and soon we expect them to be available for general availability users.

Till then, let’s wait and watch how developers experiment with these innovative upgrades and bring something valuable and incredible things to the table. Stay tuned to us for more upgrades made to Azure SQL Database in near future.