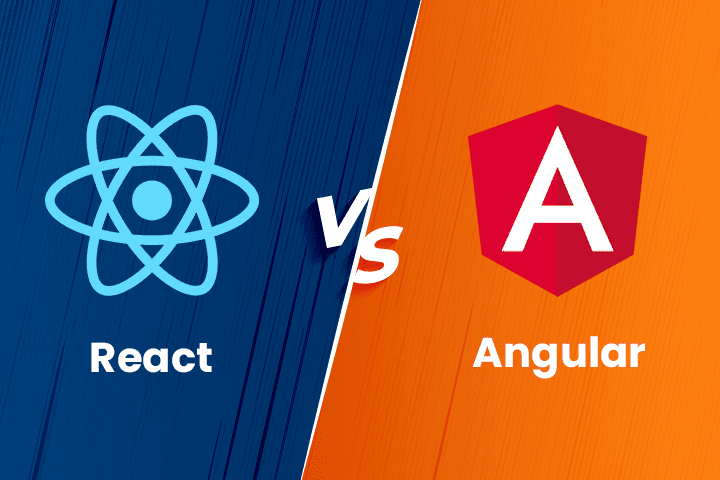 React Vs Angular: Which Is A Best Fit For Your Business Project?

This is the real story of every developer building web apps or front-end. With the myriad of options available in the form of JS frameworks, it’s confusing to choose the right JS framework that meets the business-specific project requirements along with critical aspects. It’s difficult to get out of this struggle.

The tug of the war between the two frontend frameworks- Angular and React is a real struggle. Picking up one and placing a bet on one of these frameworks is a daunting task when clients ask for the best option to select. If you are also one of those entrepreneurs, we recommend you connect with web app development experts that provide the right decision based on your project details.

The extensive expertise and experience of our developers in trying their hands on both frameworks enabled us to shed light on the comparison of these two frontend frameworks- Angular and React. Before getting into the depth of their differences, we will first understand what’s Angular and React frameworks.

The frontend JS library was developed by Facebook to build excellent UI. Leveraging declarative programming style, React determine UI state and enable developers to preview how the app will look and user interaction. In addition to reusable library code, the JSX and virtual DOM in React makes it a great fit for native-rendered, mobile app, and web app development.

The open-source nature of the framework enabled businesses to use React libraries to build UI from the ground. The modularity and coherent nature of components make React highly reusable that increases the development time. Netflix, New York Times, and others have migrated to React for high-performance and other impressive features.

Since 2010, the Angular framework is developed and maintained by Google with continuous upgrades. Since the release of Angular 2 in 2016, the umbrella term Angular 2 is used for all the Angular updated versions from Angular 2 to Angular 10. It’s built on top of TypeScript to create web apps, hybrid apps, and single-page web apps.

The one-to-one comparison between React vs. Angular to know the best of both worlds

React and Angular are good frontend frameworks that deliver the best performance for web and mobile development. However, React uses virtual DOM to update the change without rewriting the complete HTML document. Thereby rendering update gets speed up, which in turn, ensures fast performance regardless of app type and size.

Angular operates on real DOM to access and change document content, layout, and others. The problem with real DOM is- for updating a little data, the tree structure of HTML tables gets updated unless it reaches the data that needs to alter. Angular copes up with performance lagging with code practices optimization that enable the Angular app to deliver good performance.

Angular provides $cacheFactory to recalculate the data that needs to calculate at a later stage, which works best for memorization. That’s why PayPal’s payment gateway leverages Angular to handle more than 300 million transactions across the world.

React framework builds user interface by breaking web app UI development into components. At first, the components are built that self-manage their respective states and then structured together for complex UI engineering. Also, Redux, Babel, and Webpack are some of the tool integrations are required for component architecture creation.

The Angular ecosystem has an array of features such as Angular CLI, Angular Universal, and RxJS that build an architecture plain-sailing without any outside help.

On the other hand, Angular leverages both one-way and two-way data binding that updates two layers with the same data. The model layer gets updated as soon as the input data changes in the backend. The binding of the HTML element with the model variable helps in crafting interactive UI with no callbacks or developers’ efforts intervention.

The bi-directional nature of Angular with two-way data binding makes it easier for enterprises to obtain data from ERP software like- accounting, finance, medical, and other software.

Businesses that team up with web application development partners expect high loading speed to improve click-through rates. It’s a bundle file that’s downloaded at the initial page, which is if optimized, the page gets loaded quickly. Bundle file size matters a ton in the case of large-sized web or mobile apps as it impacts performance.

Angular handles single-page web application development easily. The framework leverages the compiler to create an understanding between the code in the bundle file and the browser, which speeds up compiling process. However, the HTML code written in components extends the bundle size that interferes with performance. That’s where the Ahead-of-time compiler helps a ton, which is activated through CLI.

React is different from other frameworks in the sense of code review practices provided by Linters. Following a set of rules strictly, Linters generate the same code practices that keep the codebase consistent, which, in turn, improves the code quality without any integrations.

When it comes to building web clients, the developers need to deal with maintainability problems because combining JS and HTML is tricky due to less modularization. Angular enables developers to address this issue with maintainable JS that provides HTML extension for the same. It reduces a lot of work from the developers’ shoulders and saves time as well. The single-page app development with various programming modules and complex structures becomes easier with Angular.

React makes the code quality and maintainability a breeze by eliminating the need to rewrite the code repetitively. It allows developers to write code that works in small modules thereby alleviating redundancy. The code reusability that facilitates reusable UI component creation is an add-on. The custom React components creation enables components recognization with unique naming conventions.

The blend of JSON and client-side caching allow Angular to improve the server-side performance. The static view of the application is created by server-side rendering that makes the app easily searchable. The in-built testing tools such as object mocking and dependency injection continuously make efforts to reduce traffic between server and client.

React facilitate the RenderToString function which developers can call to render the application to the server. Also, renderToStaticMarkup is a good function to avoid DOM attributes creation that provides great help for static page generators. The high-speed rendering and good performance even with poor internet connection availability is the reason Facebook leverages React framework.

It’s difficult to achieve 100% testing goals in the JS dynamically typed languages. All the features created in Angular consider testability in mind and each unit of code isolation. The parts that don’t exist in the testing environment are mocked, which is executed by the dependency function in Angular.

In React framework, testing is much easier as test suites are continuously executed to run test cases. Also, ava, Mocha, and Jest-like test runners run the tests during web app development. The test runners are compatible with browser-specific requirements and different features and enable simulations.

When the app is expected to grow as the business flourishes, or you are building MVP, that’s expected to enhance in near future, then support for scalability is a must. When we look at Angular, it’s packed with all the features that developers need for scaling the app without requiring any outside help.

When React framework is used, its reliance on third-party integrations makes it not a good fit for scalability. However, the leading players such as Instagram, Facebook, and WhatsApp leveraged React to build scalable apps, which demands architecture maintainability and server-side rendering wherein React excels.

Updating architecture is a part and parcel of the web app or mobile development process whenever there’s a need for new libraries or modules addition pop up. Presently, businesses prefer to upgrade the app gradually with the addition of new features to keep the target audience interested in the application.

When it comes to updating the architecture of the Angular framework, making a jump from Angular 2 to 7 is not possible. Instead, the updates are installed one after another from Angular version 2 to version 7. The case is completely different with React framework as it supports complete backward compatibility. Different releases of the library are added to the application and previous versions are updated effortlessly.

When we look at the popularity of these frontend frameworks for web application development among developers, or at various leading IT sites, the results are different.

On stack overflow, Angular is well-received by 57% of the developers who are interested in using this language for programming, while React framework gains an upper hand with a 76% share.

According to a JetBrain survey for JS frameworks, Angular is leveraged regularly by 23% while React framework is in use by 20%.

When we look at the name of known projects built using these two frameworks, it seems both of them are leveraged and perform like a superhero in the market.

Angular is a not-so-good fit for the rookie developers to start ahead as learning primary elements such as directives, services, dependency injection, components, services, and others are typically difficult as compared to React.

For the web application development using React framework, the novice developers just need to learn component writing, internal states management, and props usage for configuration. React won’t require developers to get entangled in learning the complexities of the logical structure that makes it easy to hold a grasp on the language. Initially, it’s difficult for the new developers to cope up, but web app development experts can do it easily.

Which is the best: React or Angular?

We don’t want you to see a winner between the two. Both of these frontend frameworks are wonderful and recommended by web app development experts depending on the business-specific requirements.

For instance, when developers want to build an application using a framework having a short learning curve, enable code reusability, implement virtual DOM, or facilitate custom component creation, then React framework is the best fit. On the flip side, Angular is capable of handling multiple things simultaneously and ensuring high performance with a change detection mechanism.

Confused, which framework to choose? Let our experts help you!

Both front-end frameworks are amazing. Come up with your web app or mobile development requirements and then match which JS framework perfectly meets the need. Later, go ahead.