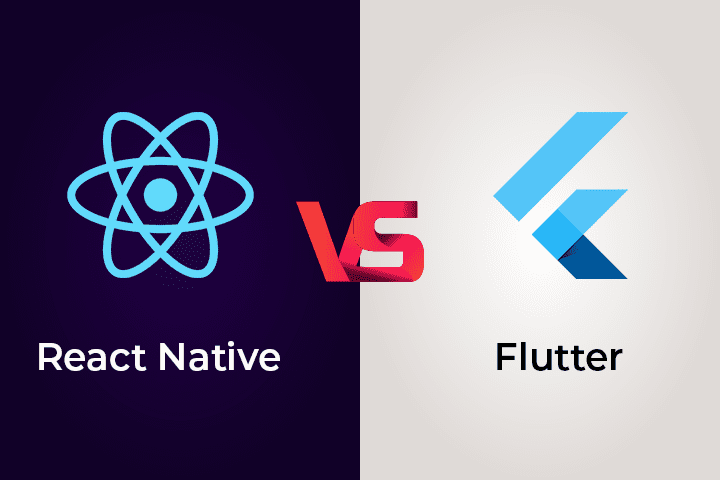 React Native Vs Flutter- Which Cross-Platform Framework Is Most Preferable in 2022?

However, the selection of the best Mobile application Framework is a critical decision that determines how efficient the mobile app’s functionality will be and how the app looks and feel across all the platforms. React Native and Flutter- both frameworks from tech giants aim to help businesses deliver better service and performance. In the tug of war, it’s implausible to declare the winner.

Here, we have compared both- React Native vs Flutter in 2022 based on some parameters that will help you choose the best framework for your next mobile development project. before moving ahead with a comparison, we will have a glance at both frameworks in brief.

What is React Native?

The open-source framework is created by Facebook, way back in 2015, to resolve internal technical issues. Later, React Native gates opened to the world that enable developers to leverage React Native for building native-like UI and incorporate native functionalities or capabilities to the cross-platform apps.

The JS library makes developers write only one codebase and get the app shipped for both platforms- Android and iOS. Instagram, Skype, Tesla, Bloomberg, and Pinterest are the popular apps that are powered by React Native framework.

The framework launched by Google, that’s based on Dart programming language provides all the tools to the developers to build apps that work hassle-free on mobile, desktop, and web platforms. The enhanced UI toolkit of the Flutter is eye-candy that enables expressive UI development that offers native-like performance.

Flutter emerged as one of the fastest-growing cross-platform frameworks for mobile application development. But the development speed is lower as compared to React Native.

When working with Flutter, developers require to necessarily add different code files for Android and iOS applications in the case when app development involves complex design. Flutter re-build native components, which speeds up the development process, but React Native has a large collection of third-party libraries that accelerate app development.

However, a third-party library such as Proguard improves the React Native app’s performance with bytecode optimization. Plus, Flutter has out-of-the-box support for a native component and has set 60 FPS animation standards that help in increasing the app’s performance. A similar thing can be done in React Native, but it will increase app size. So, it’s not a good option.

React Native architecture relies on JS runtime environment, which is also referred to as JavaScript Bridge. Facebook’s Flux architecture is leveraged by native API and platform to communicate with JS code. Flux is the architecture of Facebook but still needs a JavaScript bridge to integrate it. However, this design is not fast enough to defend against Flutter.

Flutter is built using Dart language, which already has pre-built components that alleviate the need for a bridge to communicate with native APIs. Flutter has Cupertino, Material design, and Skia (a 2d graphics rendering library) that provides everything that developers need for app development.

Flutter is built on top of the Dart programming language, which is barely used by developers before 2011. However, the developers who have tried their hands on Dart find it easier to use because of its easy-to-understand syntax and support for object-oriented concepts. The extensive documentation makes it quick to get started for new developers.

Installation is a breeze!

Flutter needs binary packages to be installed from GitHub irrespective of the platform selected. Also, developers need to install additional libraries based on your systems like macOS, and set up system-like path variable, which is a time-consuming process and makes the installation process slower.

React Native has an easy and speedy installation process. It requires a Node package manager which comes with Node.JS that can be installed through a single line of code. More steps involved with Flutter framework installation make it slower. So, we can say React Native is the best mobile application development framework when it comes to faster installation.

Flutter enables a seamless release process and it’s easy to get an app to the App Store. With React Native framework, the release process is slow, which is improved using a third-party deployment tool. When both frameworks are compared in this area, Flutter gains an upper hand, and React Native needs to be enhanced which we can expect in future upgrades. In react-native vs Flutter 2022, Flutter enables a mobile app to get released at the time you want.

React Native is an older kid on the block and has gained immense popularity worldwide with a huge community of developers. There are more than 2500 developers actively working on the framework and sharing their work. Additionally, a lot of conferences and meetups conducted related to React Native and thousands of live projects signal how wide the community is.

Flutter Community is growing faster but still, it has not reached the level that React Native achieved in terms of the number of developers. According to the stack overflow survey many people are showcasing their interest in Flutter rather than React Native. Its progress is evaluated with more than 14K live projects that are accomplished in reduced time.

React Native is a JS framework that already has a unit-level testing framework. Officially, no testing tool for UI design test is provided, but third-party tools such as Appium and Detox are leveraged. A Jest is also a popular tool for Snapshot testing.

Flutter gains an edge in testing with a range of testing features provided for testing the app at the unit level, widget level, and integration level. The beauty of widget tests is they facilitate UI design testing at the speed of unit test runs. In React Native vs Flutter 2022, Flutter enables the mobile app gets tested rapidly.

Need to develop an app?

The transition from native to cross-platform development is slow, but it’s picking up the pace globally. Now, one-third of developers are building apps using cross-platform frameworks, where React Native and Flutter are the leading frameworks. However, there is no superior framework as every framework has its pros and cons.

Come up with your project requirements and then select the framework that meets your need. For instance, if your project targets native programming-like GPS, system-level tasks, or Bluetooth-related things, then Flutter is better due to native components. If you have plug-in-play development needs, then react fits the bill. All in all, the framework selection completely depends on your project needs.