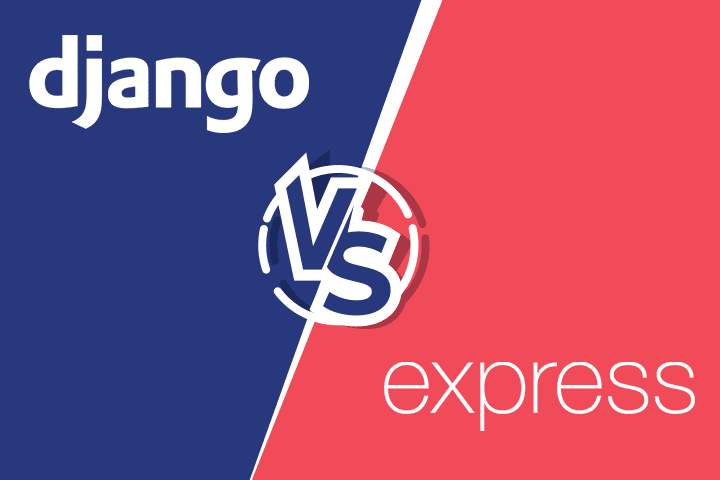 However, picking up the one between these Nodejs Frameworks for App Development in 2022 is a little difficult for the businesses as each has its pros and cons. Our team of coding superheroes has made things easier by providing quality data that highlights which one is the best framework in the side-by-side comparison of these two frameworks.

Before digging deeper into the differences between the two frameworks to know which is the best Node.JS framework 2022, let’s understand each of them in brief.

What is the Express framework?

The framework written in JS is an open-source server-side framework that’s a part of the MEAN, MERN, and MEVN stack. It’s leading the position in the top 10k, top 100k, and top 1 million websites with wider coverage in various industry verticals.

What is the Django framework?

The open-source framework written in Python enables secure, scalable, and faster web app development with a range of features that free up the developers from repetitive tasks. It has received more than 63.9k stars on Github with 23000 watchers. It’s widely used in the education industry for web apps, scalable apps, ML integration, data-driven apps, and backend API development.

Spotify, Disqus, Instagram, Mozilla, and Dropbox are popular apps whose backend is powered by the Django framework.

The differences between the two frameworks- Django Vs Express

Express stands out in terms of speed in the node.js applications as it can handle more requests per second. PayPal chose Express for the backend because they found the 35% decrease in response time for the page and that can be loaded at 200 milliseconds faster. Saying Express stands ahead as the best web app framework in 2022 won’t be hyperbole.

On the flip side, Django is not as good as Express in terms of high performance. In fact, the developers face lower performance when running requests via middleware, converting DB queries into Python objects, and serializing and deserializing JSON strings. However, optimal hardware deployment and best development practices enable overcoming performance challenges.

The non-blocking server feature of Node.JS is derived by the Express framework that makes handling user requests effortless. Express is lightweight as well. Conclusively, the developers can use this framework to build large-scale, scalable apps.

The scaling capabilities of Django are well-known through the websites that have used this framework to handle growing traffic and user requests. It seamlessly works with various technologies while ensuring reduced loading times and improved performance due to optimization of CSS, DB, and images, and load balancing with other resources. The CDN and cloud solutions are implemented to create space for scaling.

Django framework requires MVT (Model-View-Template) architecture where the controller is replaced by a template file. The template file contains Django template language and HTML that works like a controller of MVC architecture for the dynamic website development. This is why every Insta user gets a personalized feed.

Express’s core features neither include any database nor promote any database, which enables developers to integrate the databases of their choice, be it- MySQL, CouchDB, Oracle, MongoDB, or SQL Server. The liberty makes it the best web app framework in 2022 for developers.

Django supports five databases namely- SQLite, PostgreSQL, Oracle, MariaDB, and MySQL, and works integrate well with other databases. It provides the freedom to use the database according to the project requirements so you won’t be disappointed when you have specific database needs.

Undeniably, the Express framework’s structure is so fair that it is combined with microservice architecture glitch-free. That’s why Express gateway built a Microservice API gateway for businesses that enables microservice structure implementation for speedy development and higher scalability.

Django features versatility, security features, and faster development that make it a perfect fit for the microservices architecture. It’s feasible to break the Django projects into smaller microservice functionalities that make the project highly scalable. It’s the best Node.JS framework for microservices leverage.

The Express framework defines some of the good practices for conducting tests. The middleware and APIs tests are automated by combing testing frameworks (Mocha, ava, Jest, and Postman) with libraries such as chai, Sinon, and others.

Django framework has simplified app testing by providing an array of tools and extensive documentation that makes writing tests easier. Testing all the layers of logic is facilitated by Django which helps in getting a flawless product at the end. Testing capabilities puts Django as one of the outstanding Nodejs Frameworks for App Development in 2022.

Worldwide popularity and usability have made the Express community enough large that’s growing with more developers taking interest in the framework. The continuous reviews, developer contributions, and online committee meetings resolve the development and maintenance issues that developers face during development.

Django has a huge community with more than 280,000 questions asked by the developers on Stack Overflow, 101k members on Reddit, and more. The growing interest of developers expects us to see the larger community in near future.

Confused, Which framework to choose? Let our experts help you!

Both of the Node.JS Frameworks for App Development in 2022 work great in building scalable applications. However, declaring the best Node.JS framework 2022 is impossible. You should choose the best web app framework in 2022 based on your project requirements.

For instance, the Express framework is the best choice when you want to get build a scalable, real-time app that can handle millions of user requests smoothly. On the other hand, if you want to get build a social media website with ML integration where hyper-personalization, security, analysis, and visualization are the need, Django is good to opt for.