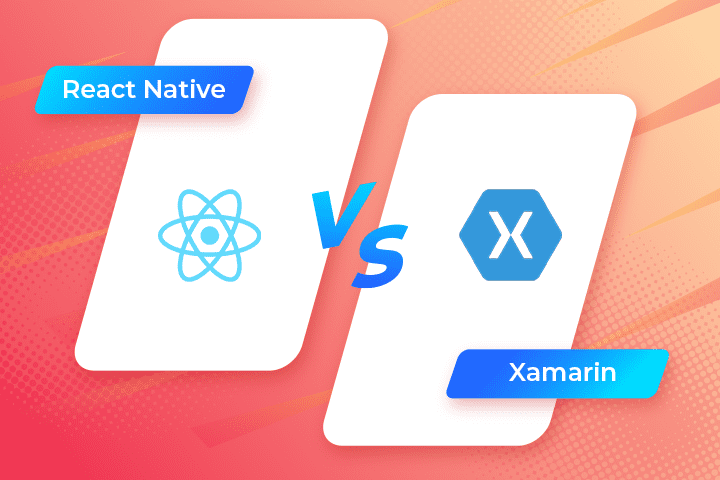 React Native Vs Xamarin- Which Cross-Platform Framework Should You Choose?

According to Grandview research, “The mobile app market size valued $206.73 in 2022 and expected to reach $565.40 billion by 2030 at a CAGR of 13.4%.”
The latest pandemic has geared up the businesses to go mobile, which has accelerated the mobile app development need worldwide. The increasing requirements to get the mobile apps developed at speed for both major platforms- Android and iOS have made things a little trickier for the development companies.

What is React Native framework?

React Native framework was built by Facebook’s engineer to improve mobile experiences in 2015, and later it was made available to developers by making it open-source. Gradually, the platform has evolved as a matured cross-platform development framework with all the capabilities baked into it, which enables native-like app development.

With an easy learning curve, the framework renders native UI and hot reloading that speeds up development. The enormous possibilities for third-party plugin integration made leading brands such as Tesla, Discord, Walmart, and Shopify power their app using the framework.
What is a Xamarin framework?

Xamarin- the dot net framework was founded in 2011 and gets open-source when it’s bought by Microsoft in 2016. With Microsoft visual studio IDE and visual studio enterprise features, Xamarin has become a perfect fit for enterprise app development. the framework excels at converting platform-specific elements at runtime and rendering native-like experiences.

The improved access to native APIs, built-in Xamarin forms, and .NET framework feature leverage make the framework a better fit in the shoes of cross-platform development. Most of the use of C# makes it easier for development companies to get developers that can work with the Xamarin framework.

Xamarin vs. React Native- the side-by-side comparison determining which is better

The cross-platform frameworks are ill-famous for their performance which is compromised just for the sake of reduced development time, efforts, and cost. Nowadays, continuous upgrades have changed the scene. The best cross-platform app development framework 2022 is now delivering stable and high-performant releases.

React Native is a JS-based framework that reloads the code by pushing a refresh to the app, thereby eliminating the compilation requirements. It relies on the chrome developer tool for debugging. It does not support 64-bit mode on Android and also shows poor results on iOS when code is executed. Compilation and development drastically impact the performance.

Xamarin development provides native performance comparable to Java offers in Android app development and C# in iOS development. Xamarin test clouds facilitate developers to test the app during development consistently which results in error-free coding. Moreover, the test cloud is performed across all the platforms which eliminates the need to test the app individually on distinct devices.

React Native stands out in the market share of technology products with 17% usage in mobile app development. 28% of the software development companies leverage this technology and it’s widely used in the USA by 49% of the companies. According to a Stack Overflow survey conducted on over 80,000 developers, React Native scored 6th position with a 14.5% share among all the frameworks and tools.

The updates rendered through Xamarin in reduced time and cost are deployed to a source file and later on the platforms. These characteristics and leverage by the mainstream brands showcase that Xamarin has scored optimal popularity. However, Microsoft itself won’t use Xamarin for its flagship app and considered by the developers’ dreaded framework.

Xamarin framework requires developers to download Microsoft Visual Studio or the Visual Studio Community edition depending on the project’s needs. Having Mac is also necessary to build the app.

Conclusion: React Native gains an edge and is favored by the top mobile app development company.

React Native is a JS-based framework that leverages JIT compilation, which runs faster as opposed to interpreted languages because it gets transformed into machine code prior to execution. However, JIT compilation works only for Android but not for iOS which impacts the iOS app’s performance.

In Xamarin, the compilation time surges with the app’s size, which ultimately increases the development cost and time. The case is no different with debugging that less or more follows the same process. On the flip side. Xamarin’s compiler is fairly suited to both- Android and iOS apps, which makes it the best framework for Mobile App Development In 2022

Conclusion: In the tug of war between- React Vs Xamarin’s cross-platform framework, Xamarin takes the lead.

Both frameworks- React Native and Xamarin which are regarded as the best cross-platform app development framework 2022 are entirely free to use.

However, the visual enterprise edition of Xamarin is a premium version that costs around $3000 annually to the developers. Xamarin is used for non-enterprise projects with up to 5 users and more features or users, paying an extra amount becomes essential. On the other hand, React Native framework won’t have anything in the bucket that requires developers to pay even a single penny.

Conclusion: React Native is inexpensive as compared to Xamarin in the race of top mobile app development frameworks.

Get Connected With Business Consultants To Select The Right Framework

The close look makes everything crystal clear. For instance, if faster development, optimal graphics design needs, and testing within the development environment is your project need, then Xamarin is the perfect fit. Check and get everything finalized. Still, if you are confused, get connected with business consultants to select the right framework for your app development.