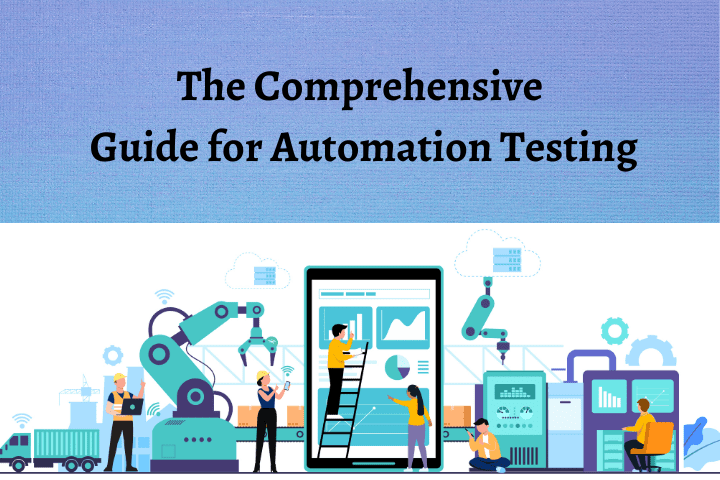 The Comprehensive Guide for Automation Testing

Do you know what’s the minimum expectation of people when they use digital applications? The app must be high-quality that perform faster and glitch-free across all the devices. But, how is it possible? It requires rigorous testing at scale.

Sadly, quality testing engineers are a scarce resource. Fortunately, if you found them, you can’t make them work for more than 60 hours a week. It means testing the app 24 hours a day, and seven days a week is impossible.

Simultaneously, speeding up regression testing while integrating and releasing a new feature under pressure results in a buggy application. The worst part is testing the application after it’s built, the app release becomes unstable.

It creates a need for tests to be automated. Here, automation testing services step in.

What Is Automation Testing?

The automation testing services enable running tests on the app with little-to-none human intervention. Unlike human testers that write test cases separately and then execute them, the automation scripts are created once and can run anytime.

The automation testing is a perfect fit for the tedious tests that need to perform repetitively, the output is clear- wrong or right, and business-critical tests that need to carry out regularly. The test automation services and quality assurance services enable testing at scale, improve the speed of delivery, and ensure streamlined releases.

Different Types of Testing That can be Automated

This type of automation testing service involves running tests on separate functions individually to ensure it works as expected. It’s performed during app development helps in detecting the bugs sooner and aids in keeping the cost of fixing the bugs minimum. The first level of web app testing written by developers is broadly leveraged in three ways.

The black-box testing is used for UI testing, where test scripts replicate the users’ interaction with UI to check UI performance. The automated testing software such as Selenium ensures the app’s UI is working as required.

White-box testing tests the app’s usability through its functional behavior testing. the grey-box testing helps in standing out with test cases execution and risk performance analysis.

Smoke testing is also known as confidence testing, that’s designed to check the app’s stability and viability. It tests which aspect of the app is functional or non-functional, which helps in identifying the core functionalities of the app. It’s executed when developed functions are integrated with the application. Any failure in smoke testing put the feature straight in front of the development team to fix the issues.

The automated testing software put regression testing under the maintenance testing category that analyzes the differences in the feature’s behavior when any changes are made to code. During re-running of functional and non-functional tests, when performance gets changed, the app is regressed.

The test automation companies perform functional testing to identify all functions such as user interface, database, security, APIs, server application, and others perform as expected.

When the full-fledged solution is about to release after testing it using test automation services and quality assurance services, it must be checked for how well it will be received by the app users. The final level of testing- acceptance testing is automated for better results.

Performance testing executed using automated testing software ensure that the app performs at speed, functions glitch-free under increasing load, is responsive across all devices, and remains stable. The optimization of all the performance issues identified under testing ensures the app’s success in the competition.

Often, figuring out users’ preferences or interests for revamped UI or enhanced functionality is tricky. Automating the alpha and beta testing helps test automation companies to know which feature or interface improves user engagement so that they are flagged or turned on accordingly.

Other than app functionalities, there are a lot of non-functional requirements that users expect to see in the applications such as performance, usability, reliability, compatibility, scalability, security, and others. It brings all those factors into the limelight that showcase how well the app performs. It’s generally performed after functionality testing to find out the logical function work to par and users’ expectations.

When the QA and test engineers need to repeat the same test multiple times with a different set of data, it ends up wasting a lot of time and resources. That’s where data-driven testing facilitates creating one test that can be run using different test accounts. At AIMDek, the team has created Data Driven framework for Automation Testing to enable data-driven testing that ensures code reusability.

At AIMDek, the team uses Selenium WebDriver and Selenium WebDriver with Java to run multiple tests at the same time in different languages. The flexibility of Selenium testing enables non-tech-savvy experts to create tests with reduced maintenance required.

Apache Jmeter is a well-famous automation testing tool used by test automation companies for performance testing. The tool leveraged web services and web applications to evaluate the app’s strength in terms of handling different types of loads. Apache simulates heavy loads under different conditions on a server or a network to measure app performance and test functional behavior.

The robotic process automation tool enables enterprise testing via seamless integration with existing ecosystem. With drag and drop workflow, inbuilt activities, advanced scrapping options, and high security, the UiPath makes the test management smarter and automated. With availability on cloud or on-premises, it designs and organize the tests to ensure every requirement is fully tested. It helps in resolving the bugs faster with continuous monitoring and releasing test results instantly.

The test automation services built on the top of Selenium testing tool utilize the best features of Selenium to allow testers to write and run test cases effortlessly. While working with Cucumber, Katalon Studio facilitates writing test cases in plain language. The use of an open-source framework removes complexities from creating and writing test cases. The active community forum is an add-on, which helps testers to get the required assistance or help.

Join Our Webinar to know more about automation testing

Do you know- 90% of the app fails due to poor testing? The bugs, crashes, or slow loading makes the users abandon the app or uninstall it. It means ensuring quality delivery is the need of the hour.

A recent survey has reported that salary of QA and testers are rising every year by a great percentage, but still, the software is struggling with quality. That’s where automation testing is the best modern testing solution making ‘bug-free’ delivery realistic. Automating testing services allow the team to focus on complex projects rather than wasting their time on repetitive and tedious testing.

The informative webinar would help in making the right choice, join us to know more about automation testing. Save the date for your business’s digital success.