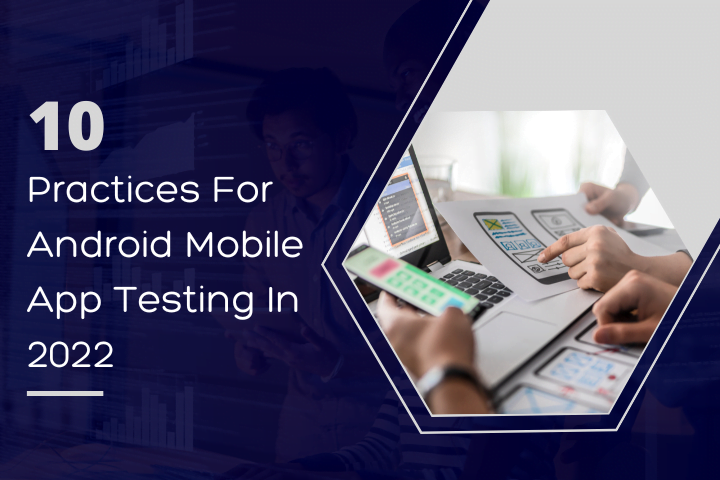 The Top 10 Practices For Android Mobile App Testing In 2022

The problem is not that testing is the bottleneck. The problem is that you don’t know what’s in the bottle. That’s a problem that software testing and software quality assurance address. — Michael Bolton, author of “Rapid Software Testing”.

The Android-supported mobile phone market is growing rapidly with increased usage. The rise in Android smartphone and tablet sales is responsible for the growth and popularity of Android apps. In fact, stats were found saying that the Android app demands outstrip the supplies, which makes it more important to get build Android apps of high quality that meets the needs of your users.

What’s more? The crowded Google play store has many applications that offer similar functionalities and are riddled with bugs that impact the app’s performance. This is why a certain percentage of Android apps face rejection during app submission. All of these factors have made Android mobile app testing a must-have for Android app development.

GET OUR EXPERT’S OPINION TODAY

Why is mobile application testing essential for businesses?

The businesses not only save the app from unexpected death but witness a bunch of benefits with mobile app testing services. They are-
Get built full-fledged solution: Mobile app testing ensure that the app’s functionality work as expected when the users navigate through the app.

Uplifts brand Image: Mobile app testing helps in delivering high-quality apps to end-users that keep them engaged and increase their trust in the brand, which in turn uplifts its brand image in the market.

Improves the app UI: During mobile app testing, testers test the product from the end-users perspective and assess the overall app experience it delivers to the user. Testers validate the user interface compatibility for various devices of varying screen sizes to ensure the app is convenient and easy to use.

How Android Mobile Applications are tested?

Android mobile app testing goes through various stages to ensure flawless app development and release. The steps that you should follow- Testers identify which things to test and which to be kept on priority during app development after deciding the scope and the test coverage of test cases.

Decide the type of testing to be performed

Based on the software testing needs, testers need to decide whether to automate or manually execute the test. Tester leverage test automation services as per the app testing requirements to perform mobile automation testing and software quality assurance that result in the faster release and faster time-to-market.

Split the test into Smaller Units

Tester divides their test case into small parts so that all functionalities are covered and the bug-free product is delivered to end-users.

Testing in Real and Simulators Device

Emulators and simulators are leveraged during app development to quickly and efficiently test the app. Understanding the importance of testing the app on real Android smartphones before it’s submitted to the app store, testers use emulators to simulate mobile browser environment and OS emulator from Android to know how the app look-and-feel and performs on a real device.

Track and manage the defects

Tester needs to log their defect in the project management system so that developers and other team members understand major defects along with their priority order to fix them accordingly.

Security testing unearths important data related to vulnerabilities to ensure the app remains protected from malware attacks or fraudsters. The app free from threats ensures data is safeguarded from any loss.

Making the app perform optimally in different network conditions is all-important to ensure its wide acceptance worldwide. It requires testing the app on different data networks like- 2G, 3G,4G, and 5G network to test the loading time of the app on the various data network.

The users encounter problems when the app is updated or uninstalled such as data is not cleared completely from the mobile device. It requires an Android tester to check the update and install/uninstall procedure that doesn’t interfere with the user experience.

What are the challenges faced by testers during mobile application testing?

Mobile app testing, especially Android app testing is not a work of an average Joe. Even, Android testers face challenges during testing that can be prevented if the testers consider things proactively. The challenges are- The screen sizes of mobile devices vary such as an iPhone differs from Android and other smartphones. Testers must check different layouts and elements against different pixel densities, which is time-consuming.

Frequently changing customer requirements is another challenge that testers face with mobile app testing. For instance, minimal design has become imperative to appeal the modern users but is not well-received by the older generation.

Mobile apps tend to consume battery life quickly when they are left open in the background by the users unknowingly. To prevent excessive battery drainage, battery consumption testing for different devices under distinct conditions is challenging for the testers.

The mobile app testing in 2022 and the years to come is a vital part of app development that businesses should not overlook at any cost. Businesses can reap the advantages of mobile app testing only when it’s done rightly and testers are aware of the challenges ahead of time. so, what to do?

Get An Estimated Budget From Our Experts Now

GET A 30 MINUTE FREE CONSULTATION

The mobile app testing guide has covered all the aspects from Android app testing benefits and tips to challenges that help you get the app tested from 360-degree leaving no gap for the cyber-frauds to put a dent in the app. Get connected with AIMDek’s Android app development team which provides a suite of testing services to ensure no aspect of the app remains untested and impacts the app’s performance in the market.