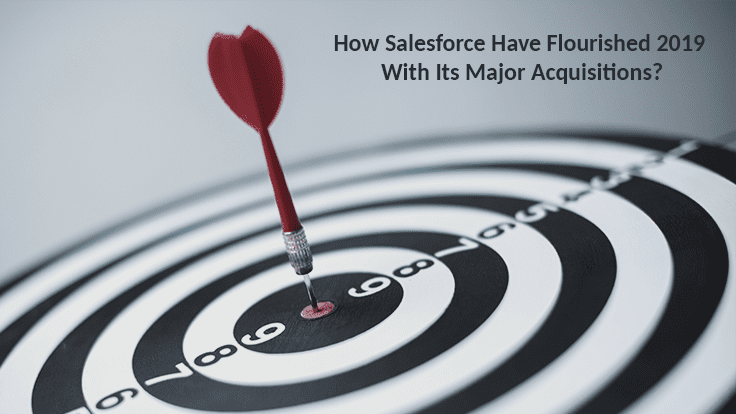 How Salesforce Have Flourished 2019 With Its Major Acquisitions?

Salesforce has made its mark this year to the point that it has picked up a number of path-breaking acquisitions and is gaining strength in all markets. With a superfluity of applications coming under its wings in 2019, it is excellent in several fields and people are slowly turning to its performance and durability applications.

Although the company spent a lump sum on purchasing these products, the outcome from these apps was fantastic. We have demonstrated their success in almost all fields and offer the best customer consulting services.

The company started in 1999 as a CRM service provider from a small apartment in San Francisco, but over the years it has established itself in all fields. In the digital world, it has become a big name and has offered services like no other. They were committed to their work and delivered to their customers the end product on time. The organization believes in creating a healthy environment for its employees and respects all people working in the company in equal measure.

Salesforce closed the largest deal ever and purchased Tableau Software, a company known for its big data services. The number one leader in CRM Solutions and the one major player in the analytics market have come together with this record-breaking deal. This acquisition allowed customers to access the ubiquity of data than they were previously doing. The deal was announced at the beginning of August 2019.  With its mergers and acquisitions over the past few years. Salesforce has made its mark in the application market.

Let’s look at some of the game changer acquisitions which made salesforce win the hearts of millions.

Salesforce is a niche supplier of CRM technology and gave its customers the best products. For the company, this year was a year of change as it attached a lot of feathers to its hat. With the company acquiring some of the best deals such as Tableau and ClickSoftware, the organization has become a game-changer and will also demonstrate its versatility in other areas. It will soon transform the digital work while working to provide its customers with the best experience. With this software update, it will now have a diverse set of customers.

Salesforce had the second-best name for CRM Solution application earlier, but it would be wrong to call it the same. Because of two values–organic development and internal–it has gained international fame with the aid of its SaaS platform. The company is growing by 20 percent each half.

The technology is carving a path of its own for a digital space seamless customer experience. Hence, enterprises that are focusing on marketing, sales, and customer support can enhance their productivity through an unmarred salesforce integration. Get in touch with our business consultants for the latest insights.