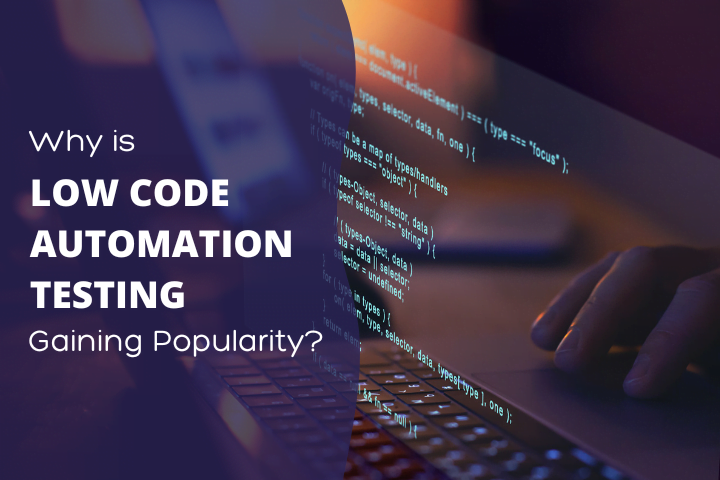 Why Is Low Code Automation Testing Taking Great Strides In The Testing Space?

In this digital universe, saying every business taking digital transformation initiative to survive and thrive in the competition is not a hyperbole. The need for modern software has ramped up after the latest pandemic. However, all businesses don’t have technology experts on the team that can help with software development.

How the need for quality, custom solution development from scratch is met?

The rising pressure on the IT team to build quality and high-performant applications in reduced time- has become a challenge for software companies. At the same time, taking care of Software Quality Assurance is all-imperative as customers show zero tolerance for bugs, crashes, or resolution issues. The shortage of tech skills is overcome through low-code technologies.

Low code technologies are expected to change the game of Software development and Software testing with the least effort and resource investment. This is why technology is expected to grow by three folds by 2025.

According to Gartner research, “By 2025, 70% of new applications developed by organizations will use low-code or no-code technologies, up from less than 25% in 2020.”

The impressive figures suggest that the future of low-code technology is promising. In this article, we will discuss low-code automation testing benefits, tools, and much more. Let’s dive in!

Get The Detailed Information With Our Testing Experts

What is low-code testing?

Low-code automation testing is a boon for the developers and testers to build and test the application quickly. It enables them to accomplish the testing work in a few hours or days which takes months to get completed. Low-code automation testing speeds up software testing without requiring any extensive code skill or training thereby it shortens the development lifecycle.

What are the benefits of leveraging low-code testing tools?

As speed has become a major driver in the software engineering process, industry leaders in the testing space are trying to accelerate the test automation process with a low-to-code testing script development process.

Save a lot of time

The time taken to create the automation framework for coding platforms is quite long and ultimately requires built-script maintenance as well. It increases testing time.

There are so many low code automation testing tools that enable the simultaneous execution of thousands of test cases possible, which ultimately enhances the test coverage to desktop, web, and mobile, and get testing done quickly.

The bug detection and fixing ahead of the app launch cut down the cost that gets increased once the app is deployed and launched. AI-powered automation testing tools deal with scripts smartly and minimize human error rates.

Low code testing means enabling Test automation services and QA automation services without needing to invest a huge amount in hiring and retaining testers. When the low-code tools are made accessible to non-tech, existing employees, they can perform testing with great ease and free them up from repetitive, manual testing tasks that improve their productivity.

My two cents: achieving 100% automation is impossible. The “Human Touch” of testing experts always remains at the heart of testing for intelligent execution of software testing.

Which challenges you can overcome with the help of low code testing?

The popular low-code testing tools that make testing a breeze

Here are a couple of low code automation testing tools you can consider to streamline QA and testing automation services. They are- It is an open-source automation testing tool with ready-to-use features where developers just need to configure the software and enable automation testing for Web, Mobile Desktop, and API automation testing. It enables full-code test script creation in 1 minute and seamlessly works with tools like JIRA, Slack, and others. It quickly record-and-playback real-world scenarios with test objects and properties auto-capture facility.

The Codeless Automation Testing Tool is a boon for enterprises that are looking for low code testing for Software, Web, Mobile, Database, Cloud, Web Services, and API testing. It is very helpful to provide global solutions & software companies for their web applications. The play and record option, and drag and drop commands automate the test and expand test coverage, which results in delivering faster feedback.

GET A FREE 30 MINUTES CONSULTATION

How AIMDek can help with low code automation testing?

Embracing low code automation testing tools, the company has democratized Software Quality Assurance and Software testing by allowing people of various domains to participate in testing. The tools eliminate the need to write test scripts or code to run the test with intuitive interfaces. Thereby allowing developers to get build and launch the app in reduced time-to-market alongside efficiently handling challenging testing scenarios with the least errors.

If the benefits of low code testing appeal to you, get connected with AIMDek testing experts to know how it’s the best fit for the business project. Let’s talk!